The most glamorous night of the year hit the Convention Centre in Dublin last night, the 9th Annual Irish Film and Television Awards.

I had the fantastic opportunity of covering the awards again this year and was thrilled to speak to the best and brightest in both the Irish and International Film Industry.  I caught up with Liam Cunningham, Dana Delany, Michael Fassbender, Fionnula Flanagan, Ruth Negga, Bressie, Ryan Tubridy, Charlene Mc Kenna and many more star’s who were enjoying the lavish ceremony. Sponsorship by Moet and Chandon champagne meant the stars were eager to dish out all their news, views and big aspirations for the future.


IFTA Chief Executive Áine Moriarty gushed: “In what has been a wonderful night of celebration for the Irish film and television industry, IFTA is delighted to announce the winners of the 9th Irish Film & Television Awards. Ireland’s film and television industry continues to punch above its weight in terms of production values, creativity and entertainment and the outstanding achievements of Irish directors, writers, actors, television and film makers has been showcased here this evening. Many congratulations to all of this year’s winners and nominees”, she said.

I spoke to the legendary Fionnula Flanagan about her passionate romance of thirty years, her outstanding career, lifetime achievement award and the fact that even though she starred in American TV drama LOST she doesn’t have a clue if they were dead the entire time! In addition, the actress won a second IFTA for her supporting role as Brendan Gleeson’s mam in ‘The Guard’.
Flanagan explained that her husband has been so supportive throughout her entire career and winning the IFTA for ‘Life time achievement’ has in no way slowed her down, she is busier than ever working with Pat Shortt on a new project. Desperate Housewives actress Dana Delany flew in for the IFTAs and arrived in style in her black trailing Prada gown. Delany was originally asked to play the part of Bree Van De Camp which she turned down three times. She admits she did regret this afterwards but was enthusiastic about playing Katherine Mayfair, a versatile complex character. Her gripping performance earned her an Emmy nomination. Delany assured me that her and Katherine are polar opposites. Love/Hate picked up a staggering number of awards on the night. The RTE crime drama scooped a total of seven statues. Love/Hate actors Aidan Gillen, Denise McCormack and Tom Vaughan Lawlor received IFTAs for Actor Lead TV Drama, Actress Support TV Drama and Actor Support TV Drama respectively, with the series’ seventh IFTA going to editor Isobel Stephenson.
I spoke to dynamic Love/Hate actress Ruth Negga who was wearing a stunning Joanne Hynes gown. The talented young lady who scooped up Best Actress told us working with Robert Sheehan previously on Misfits and now on Love/Hate is very “funny” and that “he brings a fantastic energy to the set”. Negga recently starred as Shirley Bassey in a biographical depiction of her life and as she strutted down the red carpet she certainly mirrored her idol. Irish talent working on international projects fared well at this year’s Awards Ceremony with friends Michael Fassbender on hand to accept the IFTA for Actor Lead Film for his outstanding performance in Steve McQueen’s Shame and his good friend Bridesmaids star Chris O’Dowd was presented with the award for Best Supporting Actor Film. Fassbender has great faith in the Irish Film Industry and homegrown talent. I questioned him about the fantastic fight scene in Haywire, filmed in The Shelbourne Hotel, and what kind of training and preparation was involved. The actor described said his training from the film 300 really stood to him and that he really enjoyed that racy violent scene with co star Gina Carano. Bressie was only too keen to quash speculation that he is ‘in a relationship’ as he brought his sister along to the ceremony. He admits that he has high hopes for all his acts on The Voice and even though it seems like he and Kian Egan are at at eachother’s throats on the Irish talent show it’s mostly banter. He hopes they will be “grabbing a few pints soon”.
Bressie denied that Kian is his secret Valentine and says he is very much on the market. He seemed genuinely taken aback by all the female attention he has received since The Voice hit our screens. “There are times when I have turned my chair around on the voice and I am surprised by the sexuality of the contestant! There are also times where I have wished my chair could do a 360 spin around”, Bressie divulged. After a fantastic night at the IFTAs I’m holding my breath until 2013. I have no doubt we should all be very excited for this year’s Irish film and television releases.

Posted by Laura Mullett at 04:04 No comments:

Well my fellow gossipers.... according to the Mayans this is the last year of our existence.. so we may as well go out with a bang when it comes to our styling!


Colour blocking is still on the catwalks, Marc Jacobs has his doll-like models sporting daring clashing numbers. I found a great high- street equivalent in Forever 21 - a magenta and orange short- sleeved blouse for 24 eur. Not bad considering it is suitable for both night time and casual wear. 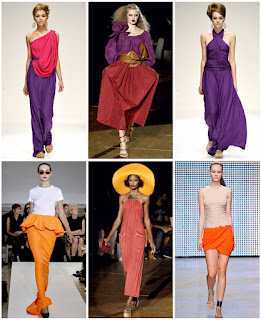 But to tone down colour blocking and bring it back to suit you, pick colours that will complement your skin pallor and hair colour. For example, if you are a traditional cailin with ravishing red locks and a pale complexion emerald green blouses, or peachy- coral will look great. If you are raven haired with a medium- tanned complexion its better to go a little bit out there... safari colours with a strong primary colour thrown in such as a sandy or brown bodycon skirt, red/fuschia cropped t-shirt/ blouse (check out american apparel online) with yellow or colourful chunky accessories best found in Topshop or Penneys look fun and flattering for Spring.


Tapered high wasted trousers worn with this seasons wedges and splatterings of statement jewellery are a sexy but sophisticated way to go. Be all european and throw a beret on! They are really cute and keep your hair in place, and in windy weather that is a godsend. The hair/lipgloss combo is negative craic. And a little frustrating. With some pearls and a blazer you are ready to go! 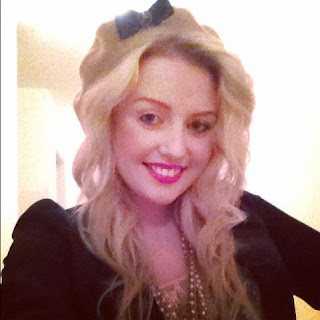 My beret from Miss Selfridge
My best fashion find this month was unrivalled by anything I have seen in a long time.
Do you know that feeling when you try on something and you feel a million euro? You feel slimmer or just plain old different. I found an adorable outfit in a vintage store in Dublin called 'Shotsy'.

This little green minidress I tried on had a built in shorts underneath and had that cute apron pattern I associate with those stepford-ish wives from the 40's.
My little green minidress is in fact a vintage swimsuit. And I have to say the ladies back then really had taste. Fashion seems inclined to come full circle. My new outfit is quite short by but with white opaque tights, grey tights or regulation black tights it is more porcelain doll- like than overtly too curve- skimming. It is versatile in daytime or for night time Sally Hansen Airbrush Tanning spray on your legs is an infamous favoured product by a lot of Irish ladies this weather.

Little did the previous owner think I would proudly don their swimwear for a night on the tiles! ;)

That's what makes vintage items so special.. each and every garment has a tale to tell. For those who only see clothes for the practical element I always want to shout from the rooftops why fashion is so important. Our style is an extension of our personality and therefore ourselves. Our little day-to-day choices about what we throw on our backs says a lot about us.


For cute little playsuits and retro attire this Spring I would recommend four places in particular...

Posted by Laura Mullett at 06:03 No comments: